skip to main | skip to sidebar

Our Support Services Departments will be open today. As is common during heavy snowfalls, a higher volume of calls to our Intake Department can be expected, resulting in some delays in getting through to us or to your questions.

We suggest the use of eTracks or to email us at support@criterions.com to submit your questions or to report your issues.

To learn more about the use of eTracks, click here
Posted by Criterions LLC at 7:24 AM

Do you see Medicare patients?

The government has now ruled that, within the first 6 months of 2011, you must prescribe electronically or you will be penalized 1% of your TOTAL Medicare payments for 2012.


ePrescribing
Incentive:
• Calculated as a percentage of estimated total Medicare Part B Fee-For-Service Allowed Charges submitted by end of February, according to the following schedule: 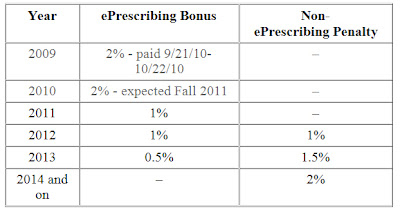 Legislation:
The Medicare Improvements for Patients and Providers Act (MIPPA)

Why is ePrescribing particularly important in 2011?
In addition to increasing Medicare reimbursement by 1% in 2011, ePrescribing in 2011 prevents physicians from incurring the ePrescribing penalties (in the chart above) for 2012 and 2013 as follows:

ENTER YOUR EMAIL ADDRESS HERE TO GET ALERTS DIRECTLY