skip to main | skip to sidebar

The Criterions EHR adopted ICD-10 in 2012. The EHR stores ICD-10 coding with ICD-9 entries after every visit. Once ICD-10 goes into effect, planned for Oct 1, 2014, Criterions products will automatically send the ICD10 with the EDI claims.

EHR clients will have the capabilities of auto-mapping the ICD-9 to ICD-10 codes, with an exception list that can be manually resolved by the users.

TCMS clients, without the comprehensive and integrated Criterions EHR, will be able to manually enter the ICD-10 in the Diagnosis setup. Users will manually find the corresponding ICD-10 codes and put them in the setup.

For more information on ICD-10, please click on the following links:
(Clicking on any of these links will open the link in a new window)
CMS/Medicare ICD-10 Coding FAQ's
AMA Transaction Code Set Standards for ICD10-codes
AHIMA ICD-10

( any image can be enlarged by clicking on it)


Procedure Code Financial Analysis report adjustment
When generating a Procedure Code Financial Analysis report, specifically by Insurance Types and including patient names, the report was not including services generated for now-inactive carriers... causing a noted difference between the detailed and the summarized versions of the report. This has now been corrected by including the services in the detailed report.
Document edits now display in preview immediately after saving
When editing a patient's document, the changes will now display in the preview portion of the screen immediately after saving (no longer need to refresh the screen).
Tickler System capacity increased
The Tickler System text box character capacity is now increased to accommodate up to 500 characters.
Worker’s Compensation form adjustment
The Worker’s Compensation form "C4.3" will now allow for the simultaneous selections of progress note fields 2A (scheduled loses) and 2B (non-scheduled losses).
A new field for Medicare Secondary Payor (MSP) Type identifier is now available
For claims billed electronically, the MSP insurance type code (submitted in loop 2000B within the SBR 05 segment) identifies the type of other insurance that is the basis for the beneficiary’s MSP status.
TCMS now has a new custom field named "Reason why Medicare is secondary" in the Patient Custom Field feature, located in the patient's Demographics screen. The electronic claim file builds the Medicare secondary insurance type code based on the custom field value entered here.
Here is a list of the MSP Provisions as provided by Medicare: 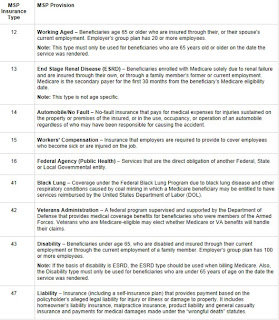 ﻿﻿﻿Correction made posting electronic United Healthcare secondary payments
United Healthcare secondary payments were sporadically posting as either GHI payments or as primary payments. This is now corrected and they will now post appropriately.
Workflow Queue is now freeze-free
The Workflow queue was sometimes "freezing" in some situations after printing a document. This problem is now addressed and this feature will no longer freeze for the affected clients.
TCMS is now Press Ganey patient-survey-friendly
A CSV-file export of patient data can now be generated from the Scheduling module for submission to Press Ganey and for the purposes of client-specific patient surveys. Press Ganey collects the data and randomly determines which of the patients are surveyed. The use of this feature requires activation by Criterions. Once activated, a Press Ganey Format option appears in the export feature: 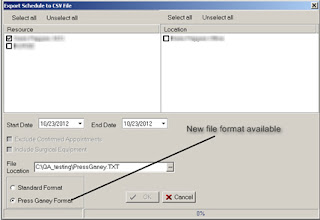 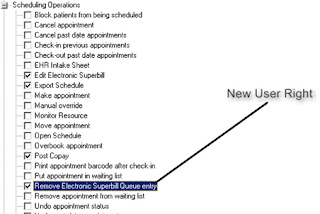 Three changes are now in effect within the Provider Number Setup screen
1) When using the "Copy Provider Number" feature, the "Pay To" and the "Billing Address" fields will now also be copied;
2) When using the "Setup by Insurance Type" feature, the user can now also enter the "Pay To" and the "Billing Address" information;
3) While using either of these two features, no existing data will be removed.

Medicaid form adjustment made to the "Total" calculations

Under certain circumstances only, the "Total" amount field of the Medicaid form was not calculating correctly. This problem has now been addressed.

ERx import adjustment made to the incoming file's distribution
Under certain circumstances only, an eRx response was distributed to the user's desktop rather than the appropriately designated workstation's folder. This problem has now been addressed.

FaxQ now validates the required 10 byte format
A adjustment was made to the FaxQ internal table that will ensure all fax numbers are formatted to exactly 10 digits/bytes.
Corrective adjustment made to the Procedure Code Financial Analysis Report

While generating the Procedure Code Financial Analysis report, specifically for select insurance carriers, the report was not limited to the selected carriers. This problem has now been addressed.
Corrective printing adjustment made to the CMS-1500 form's anesthesia minutes
Under certain circumstances only, anesthesia minutes were not printing on the CMS-1500 form. This problem has now been addressed.

New User Rights "Limited Access" option is now available
In the User Right's User Setup screen for all users, there is now a new feature labeled "Limited Access" which will limit the user's access to only patients that the user is pre-selected as "authorized" to access (a feature that is available in the patient's Additional Information screen). 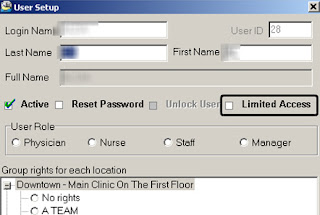 Corrective adjustment made to printing CMS-1500 (HCFA) Box 33 - uniformity rule Under certain circumstances only, the Pay To Address printed in the CMS-1500 form's Box 33 varied from the uniformity rule observed electronically. This problem has now been addressed. To memorialize the rule:
﻿﻿ 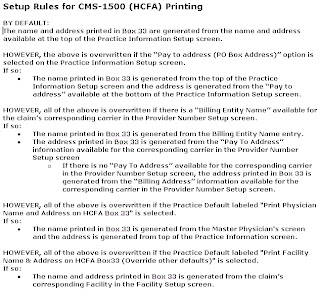 ﻿﻿
Ability to filter by Procedure Group added to Claims Ledger

A new filter option is now avvailable in a patient's Claims Ledger. Along with previously available claim filters by service date span, by carrier, and/or by location, the user can now also filter services by Procedure Group.

A prompt in eRx was not displaying
When a user (other than a physician) is using the eRx feature, a prompt is generated asking who the prescribing doctor (Master Physician) is. This prompt was not appearing in a recent version. This problem has now been addressed.

A new "Institutional" claim identifier is now available for Facilities
Facilities (in the Facility Setup screen) now have a checkbox available that, if checked, will identify all claims with that facility attached as Institutional claims and will be picked up when creating an "Institutional" EMC file. 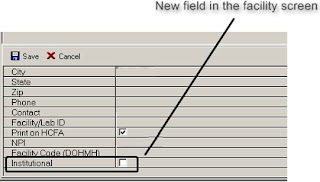 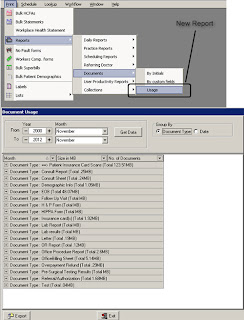 ﻿
This version also contains a few other minor bug fixes and improvements
- The Electronic Worker’s Compensation OPT/PT has been corrected to communicate with the FTP server for iHCFA.
- Confirmed appointments are included as Appointments made when generating a Scheduling Patient List.
- In the Documents module, the  the "appointment" merge fields will not regard the order they appear in within the document or the existence of past or future appointments.
- The "location" dropdown in the Daily Schedule report GUI is expanded to accomodate the display of longer location names.
- The "location" name displayed at the bottom-left corner of the TCMS splash screen is expanded to accomodate the display of longer location names.
- When multiple validation reports are uploaded together to TCMS, they will be loaded individually (which actually increases speed and helps to prevent error).
- Ticklers created without user-set delays will no longer wait for default time, and will generate when TCMS is opened by the user (this helps to prevent "ghost" ticklers).
- Checkouts in the Scheduler's ESB will generate the checked-out icon.
- Schedules and Resource Monitors will now update when schedule changes occur on the individual patient's Appointments screen.

Collection Module error with Documents is fixed.
Some TCMS users were receiving an “EOF error” under certain conditions while printing Bulk Documents from within the Collection Module. This will no longer happen 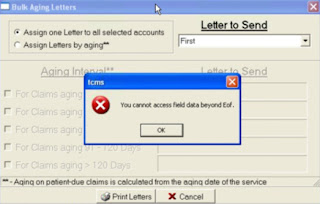 Duplicate check number posting errors are now prevented
If two checks containing the same check number were posted, there was a possibility the funds would be drawn from the wrong check, causing a “negative” amount posted from the check.

A database trigger has now been enabled to ensure that this no longer occurs.

New notation added to the Daily Transaction report
Due to the nature of the Daily Transaction Report not showing inactive locations, or the user running the report not having user rights to a given location, we have added a notation at the bottom of the report to reflect the data that is used to generate the report.
The notation reads: “This report does not generate data from transactions performed in inactive locations.
This report will also not display data from transactions performed in locations for which that user does not have rights”.

To accomplish this, place a checkmark on the new option in Practice Defaults Setup screen labeled “Send Institutional Claims to Emdeon”. Then, while creating the EMC file, select the “Institutional” option. 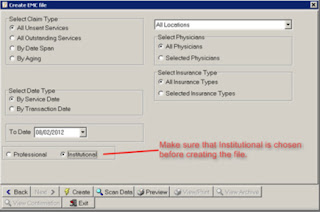 ERx files now save correctly to the intended (temp) folder
ERx files were inadvertently downloaded to the user’s desktop instead of a temp folder. This has been corrected.

A field in the Worker’s Comp HP1 for now populates appropriately
The Workers Comp HP1 form was not populating the “County” fields in all cases. This has now been corrected.

Printed HCFA/CMS-1500 forms will generate all modifiers
CPT/Claims that contained four modifiers were not generating all of the modifiers consistently.
The modifiers on the CMS-1500 form will now fill all the boxes when there are 4 modifiers for a given CPT.

Workflow Queue error addressed
The Workflow Queue had an issue with the List View under some conditions in which it would not display the document, but rather generate and error,
“Archive does not exist”. This problem has now been addressed.

HCFA/CMS-1500 error addressed
Printing a HCFA/CMS-1500 was sometimes generating an error, stating “Error in Execute: 998 Failed to Retrieve Error Message from Print Engine.”
This was related to 5010 requirement changes. A database change has been put in place to ensure the error will no longer display.
Posted by Criterions LLC at 12:59 PM

ENTER YOUR EMAIL ADDRESS HERE TO GET ALERTS DIRECTLY